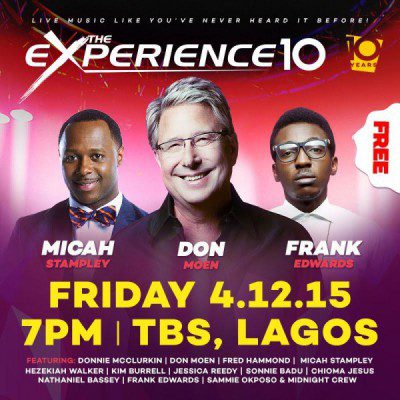 The most awaited gospel music concert in the whole of Africa is hear again, the excitement is on. People are expectant. You can literally feel it in the air.

The most awaited gospel music concert in the whole of Africa is hear again, the excitement is on. People are expectant. You can literally feel it in the air. This event has become synonymous with the city Lagos, and Nigeria as a whole. This year, 2015 is the Tenth Edition and according to the fillers we are getting, its going to a grand one.

The Experience Lagos is an annual praise-night organized by House on the Rock Church (HOTR). This concert has come to be the most anticipated gospel music event in Africa among Christians and non Christians alike. In fact globally it is reckoned as the largest gathering of people in a gospel music concert with a record 600,000 worshippers as at Last year 2014.

This event in the past has featured the best of Gospel music ministers from around the world such as, Donnie Mcclurkin, Kirk Franklin, Mary Mary, Cece Winans, Tye Tribbet and lots more. From the local scene the event has seen the ministry of Frank Edwards, Lara George, Sinach, Rooftop MCs, Onos, Sammie Okposo and many more .

There are other big International gospel names that are yet to feature in the Experience Concert, such as Juanita Bynum, Jesus Culture, Chris Tomlin, Michael W. Smith, Hillsong, Tasha Cobbs and Many more. Brace Yourself for this year because it will be a spirit filled and mind blowing experience.